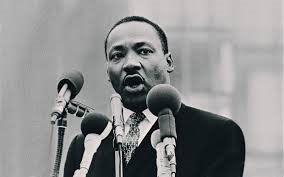 The next upcoming Martin Luther King Day is on Monday January 16th, 2023.

Celebrations of Martin Luther King, Jr's achievements might include teaching students the life of Martin Luther King, Jr. and his dedication to civil rights as a chief spokesman for nonviolent activism to end racial segregation on public transportation as well as racial discrimination in state and federal law. It is a day focusing on equal rights of all people regardless of their background. It is combined with other holidays in some states such as the Human Rights Day in Idaho and Civil Rights Day in Arizona.

Martin Luther King, Jr. was a leader of civil rights to end segregation in the United States. He advocated a non-violent approach. He is famous for his speech, "I Have A Dream." He was assassinated in 1968. His holiday was first influenced by labor unions. It became law by 1983 after musician Stevie Wonder released "Happy Birthday" single in 1980 to spread the campaign and hosted in 1981 the Rally for Peace Press Conference. Signatures of six million were collected to petition Congress to pass the law.