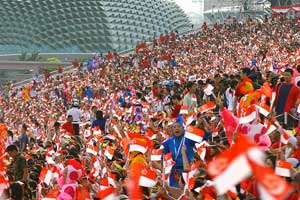 Singapore National Day celebrates the Independence from Malaysia on August 9 1965.

People will attend national pride parades particularly the parade held at the Marina Bay where the Prime Minister will have a speech followed by fireworks. Parades will include the military, police and other government and union workers all celebrating Singapore as a nation.

In 1965 Malaysia broke up into smaller nations which gave birth to the Singapore nation. Today the event is celebrated as Singapore National Day.

Provides calendars for the calendar year for Singapore.

Provides the dates for holidays for the calendar year for Singapore.