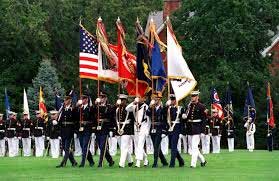 The next upcoming Armed Forces Day is on Saturday May 20th, 2023.

Armed Forces Day pays tribute to all who serve the armed forces, both in war and peace. This includes the Navy, the Army, the Air Force, the Marines, and the Coast Guard. Many military displays are open for the public to educate them about the armed forces. Other events might include parades, motorcycle "Support the Troops" themed rides, and a time of remembrance at military cemeteries with music to respect those who died for their country.

The United States' Secretary of Defense, Louis Johnson, created an Armed Forces Day in 1949 to replace the separate Air Force, Navy and Army days. On May 20, 1950 the first Armed Forces Day was celebrated. It was a day to educate the public of the jobs performed in the armed forces and their role in civilian life as well as the "state-of-the-art" military equipment. It also paid tribute to the those serving in the armed forces.