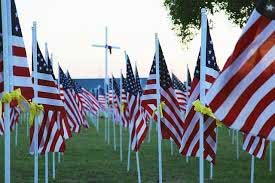 Memorial Day honors those who lost their lives while in the military service. It is traditional to fly the American flag at half mast. Many people visit national cemeteries where volunteers will place the American flag on each grave. Memorials are attended as well. It is a day that marks the start of summer and vacation season. People will attend picnics, BBQ's, sporting events, and spending time with family.

Memorial Day originated after the American Civil War to honor both the Union and Confederate soldiers who died in the war. The holiday was extended by the 20th century to include all American soldiers. Memorial Day is formally known as Decoration Day. This day is not to be confused with Veteran's Day which celebrates the service of all United States military veterans.