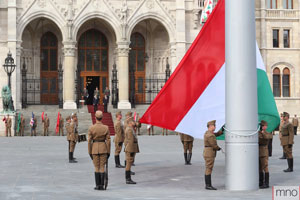 People will often wear the national colors and attend speeches or a music event. The day is held as an patriotic day.

The Revolution of 1848 in Hungary was an attempt by Hungary to become independent from the Austrian Empire ruled by the Habsburg dynasty. There was early success but later the Austrian Empire got help from Russia with Czar Nicholas sending hundreds of thousands of men thus ending the revolution and putting a stop to Hungary's attempt for independence.

Provides calendars for the calendar year for Hungary.

Provides the dates for holidays for the calendar year for Hungary.