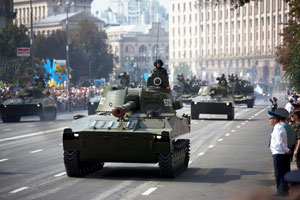 Ukraine's Independence Day is always on August 24th each year and celebrates its independence from the Soviet Union.

With the fall of the Soviet Union and the failed attempt at the coup in 1991 to return to power to the Soviet leadership, Ukraine declared independence on August 24, 1991.

Provides calendars for the calendar year for Ukraine.

Provides the dates for holidays for the calendar year for Ukraine.