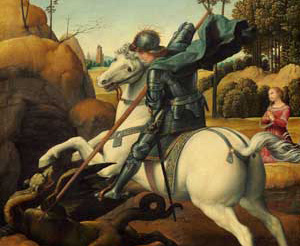 Saint George's Day in Bulgaria always falls on May 6th of each year and celebrates the patron saint of their country.

St George is patron saint of farmers and shepherds and it is tradition on this day for people to sacrifice the first born male lamb and to roast it on a spit and have a great celebration. Some will make Shepard's bread for the celebrations as well. In the capital of Sophia people can attend the military parade with the Bulgarian flag flown all over the place and a moment of silence for those who have lost their lives fighting for the country.

In 1946 the communist banned this holiday but when the Soviet Union collapsed it was re-instated back in 1993. St George, a third century soldier is known for slaying a dragon and his martyrdom which has calendar him much importance in the Bulgarian Orthodox country.