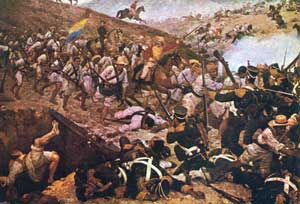 Parades and festivals throughout Colombia mark the celebration of this holiday. The military will pay their respects to those who died in battle as well.

This holiday originated when Brigadier Generals Francisco de Paula Santander and José Antonio Anzoátegui led their combined armies to control the wanted town of Boyacá. They did it in 2 hours and it created a path to independence for Colombia.

Date of Battle of Boyaca Day

Provides calendars for the calendar year for Colombia.

Provides the dates for holidays for the calendar year for Colombia.