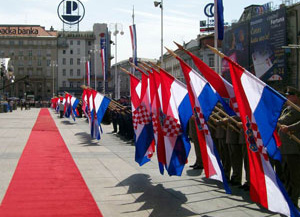 In Croatia independence day is always celebrated on October 8th and celebrates its independence from Yugoslavia back on June 25, 1991.

The fall of the Soviet Union and the breakup of the six republics that made up Yugoslavia in the early 1990's paved the way for Croatia to become its own independent nation. The holiday was first implemented and celebrated on October 8, 2002.