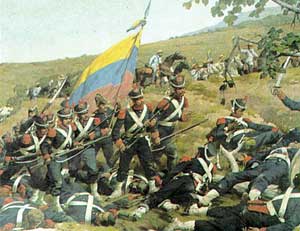 People will celebrate by attending military parades and air shows. Also people will attend re-enactments of the battle at the actual battle site with the Ministry of Education and the Carabobo State Government having elementary/ middle schoolers attend.

June 24, 1821 was the date of the battle where General Simon Bolivar defeated the Spanish lead by Field Marshal Miguel de la Torre. This victory was what won Venezuelan independence from Spain