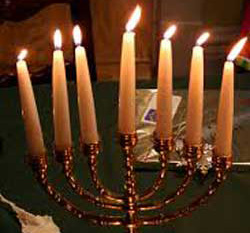 The next upcoming Hanukkah is on sundown of December 18 ending at sundown on Monday December 26, 2022.

Hanukkah commemorates the Holy Temple rededication in Jerusalem. It is observed with candle lighting of the candelabrum which is a nine-branched menorah. Each night an additional candle is lite, progressing to eight on the final night. Other festivities include gifts, playing dreidel, and eating foods like doughnuts and latkes. Hanukkah become more popular in the mid-nineteenth century as Jewish Americans adapted to American life.

Hanukkah involves the observance of the rededication and ritual cleansing of the Holy Temple from victory over the Greeks in the Maccabean War in 162 BCE. The Chanukah, also referred to as the Festival of Lights, stems from the small amount of consecrated oil for lamp burning would only last one day, and miraculously it lasted for eight days.