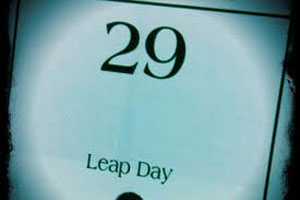 A leap year occurs approximately every 4 years and has 366 days versus the common year has 365 days. The extra leap year day is added to the to the month of February as the 29th day. Leap years in our current time past/future are the years 2016, 2020, and 2024.

Under the Gregorian calendar most years that are multiples of 4 are leap years with some exceptions like years that are multiples of 100. It takes the earth slightly less than 365.25 days to go around the sun which is called the tropical year. That is almost 6 hours (5 hours, 48 minutes, 46 seconds) longer than the 365 day Gregorian calendar. So to offset the difference the calendar has adopted leap years to occur almost every 4 years (February 29) to make the rotation of the earth around the sun match the calendar days, months and years.