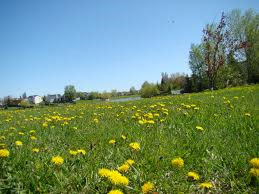 Summer provides the warmest weather of the four seasons as the days become hot and often dry (rainy in some Asian areas) with evenings remaining warm to hot depending on your location. In the Northern Hemisphere summer comes in the June, July and August months and in the Southern Hemisphere it comes in the December, January and February months. Summer comes about by the Earth increasing its axis tilt relative to the sun till the Summer Solstice (June 20-22 in Northern Hemisphere) then the sun relative to the earth changes course and starts to move back towards the equator.