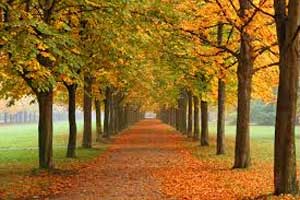 In Autumn the day light gets shorter and evenings become cooler. The plants drop their leaves and animals prepare for the cold winter ahead. In the Northern Hemisphere autumn comes in the September, October and November months and in the Southern Hemisphere it comes in the March, April and May months. Autumn comes about by the Earth decreasing its axis tilt relative to the sun decreasing the temperatures (less direct sunlight) and the shortening of the days.

During the Autumn equinox the sun shines directly on the equator and the length of day decreases (from summer season) to 12 hours of light approximately depending on your latitude location. As the autumn season progresses, in the Northern Hemisphere from its start around September 21st to 24th (September Equinox) with the sun overhead the equator, it continues south below the equator till it finally reaches the Tropic of Capricorn. In the Southern Hemisphere the sun moves on March 20th to 23rd (March Equinox) from its overhead position on the equator northward until it is overhead the Tropic of Cancer on June 21-22.