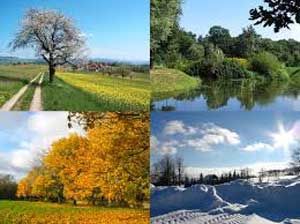 Seasons are four separate time divisions of the year marked by different weather, temperature and day lengths. The four seasons are Spring, Summer, Autumn, and Winter. Seasons are created by the earths yearly orbit (365.25 days) around the sun and the tilt of the earth's axis (23.5 degree tilt) as it orbits around the sun. The seasons are opposite of one another in the Northern vs the Southern Hemisphere. Depending on how far north or south your are in each Hemisphere will determine how severe the weather, temperature, and length of day will be.