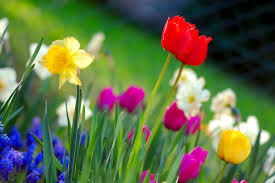 Spring is often associated with new growth, plants flowering, snow melting or melted and a new warmth in the air with plants/ animals coming out from the long winter of cold temperatures. In the Northern Hemisphere spring comes in the March, April and June months and in the Southern Hemisphere it comes in the September, October and December months. Spring comes about by the Earth increasing its axis tilt relative to the sun increasing the temperatures (more direct sunlight) and the length of the days.

During the spring equinox the sun shines directly on the equator and the length of day increases (from winter season) to 12 hours of light approximately depending on your latitude location. As the spring season progresses, in the Northern Hemisphere from its start around March 20 to 23rd (March Equinox) with the sun overhead the equator, it continues north above the equator till it finally reaches the Tropic of Cancer. In the Southern Hemisphere the sun moves on September 21st to 24th (September Equinox) from its overhead position on the equator to the southern position overhead the Tropic of Capricorn.