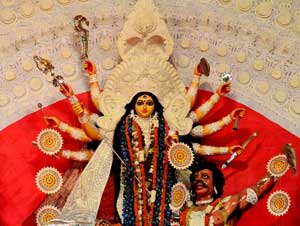 Dussehra, also known as Maha Navami, celebrates good over evil. This Hindu festival is observed on the month of Ashvin (October) on the 10th day of Shukla Paksha which means bright half.

Special prayer and offering food to the gods in temples or homes as well as outdoor fairs and parades are ways the people of the Hindu faith observe Dussehra. It is a gazetted holiday- government and businesses are closed.

Dussehra defines the victory of good over evil with the story of Rama, the Hindu god, defeating Ravanna, the demon king. Another series of Hindu stories called the Mahabharata plays a role in the holiday as well.