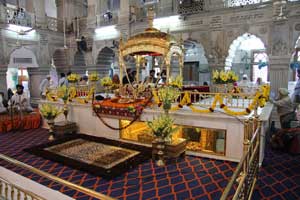 Guru Tegh Bahadur is the ninth of the ten Gurus (prophets), referred to as the ninth Nanak, of the Sikh religion. He was a martyr for religious freedom. His death is remembered on November 24th of each year.

Memorials are held with the remembrance of religious freedom and to practice one's belief without fear of persecution from Muslims. This restricted holiday allows government and businesses to remain open.

Guru Tegh Bahadur was the ninth of 10 prophets in the Sikh religion. He was known for his poetic hymns as his spiritual revelations. His public beheading in 1675 was due to his resistance of forced conversions to Islam from the Hindus in Kashmir and refusing himself to Islam conversion.